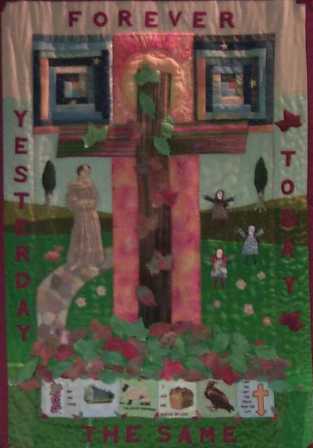 The idea to make a banner to celebrate the Millennium started early in 1999 when the ladies who meet on Thursday mornings in the Church Centre decided they would like to make one to hang in St Johns Church.
Anne Menary was asked to contribute ideas and subsequently designed a banner measuring approx 45" x 60" with the theme, Jesus Christ. 'The Same, Yesterday, Today, Forever' as this seemed an appropriate way for Christians to celebrate the year 2000.

To emphasise this theme, the banner divides into three parts.
St Francis on the left represents Yesterday. The design for St Francis comes from a traditional painting and is echoed in one of the Stained Glass windows in the Church.
The children on the right represent Today and are worked in a way to suggest children's drawing.
The cross in the centre represents Forever and links the past with the present.

The Making of the Banner

It was decided to invite anyone in the Church who wished to be involved in the making of the Banner to contribute pieces to be applied onto the background, including some Sunday Club children.
Terry Silvers made a large frame to work the design onto.

Having decided to make the cross appear organic, like the tree of life growing from the earth and stretching towards the sun, thirteen canvas work kits were assembled by Anne Menary for church members to work on. Each kit contained canvas and four skeins of crewel thread in different colours which were designed to fit together. Each member interpreted the design in their own way using tent stitch, only the colours were restricted.
Cross sections were completed by Barbara Cox, Margaret Clark, Hilary Turner, Margaret Armour, Helen Falconer, Sue Haynes, Elaine Cropper, Margaret Akehurst, Fay Bainbridge, Rosemary Reeve, Judy Brown, Pat Calow and Tina Broom.

The 'I Am...' Cross Stitch squares
The six cross stitch sections at the base of the cross were organised by Heather Silvers. They represent St Johns Church itself, the Eagle which is the traditional symbol of St John and four of the '1 am' sayings of Jesus which remain true for us all through time.
The cross stitches were worked by Heather Silvers, Carol Oxley, Sheila Todd, Dorothy Waddington, Ruth Harris and Julia Potter.

The St Francis figure and the two trees were completed in free style embroidery and applied fabric by Margaret Armour .

The children were made, padded and applied by Anne Menary.

Margaret Clark canvas stitched the path and made the pink flowers using the Bobbin Lace technique.

The sun was silk painted, padded and stitched in a free embroidery style by Anita Wilson.

Mavis Clough made the patchwork sections in a' log cabin' technique.

Tina Broom and Anita Wilson helped Anne Menary to make the felt which was then cut into leaves by Sheila Turner.

The 7 and 8 year old Sunday Club children stitched running stitches into the leaves to make veins.

Having made the embroidered sections in advance, many people spent many hours in the Church Centre stitching them to the background fabric which was pinned to the frame.

All the stitching was tackled with great humour and enthusiasm, and not a few strange contortions! (Reaching the middle of a large banner is no mean feat and requires one or two to be literally 'under the table'- and all we drank was tea!)

We stitched the Derbyshire Hills background which is in different shades of green organdie. A blue organdie was used for the sky. A feather stitch frames the central picture and links the cross stitches.

The fabric in the centre represents the warmth flowing from the sun and helps to divide the design whilst framing the cross.

Dark red felt was used for the lettering and a dark red braid surrounds the Banner. This colour was chosen to match the dominant colour in the church.

Brian Akehurst advised and helped with the hanging of the Banner.

It has been a great pleasure to see so many creative gifts come to the fore, from the young and not so young alike. Many diverse talents from patchwork to painting, traditional to modem have been used and we thank God for His guidance and the opportunity to co-ordinate our skills to such vibrant effect.

We hope everyone who views the Banner will derive as much pleasure from it as we had in making it.

Vicar
Revd  Nick Green CA
T:  01246 555881
E:  This email address is being protected from spambots. You need JavaScript enabled to view it.

How to Find Us