In 1888 two cottages at the corner of Walton Back Lane and the Chesterfield – Matlock Turnpike were converted to form a new ‘daughter’ Mission Church within the Parish of St Thomas’ Brampton. It was opened on Whit Sunday 1889 and St John’s was born.

This little church remained in use until 1916 when the new church was built on the opposite corner of Walton Back Lane. The original ‘Cottage Church’ was eventually demolished for road widening in 1938. The church contained a beautiful stained glass window, which was relocated into our present church. It was unveiled in 1918 and commemorates Captain William Mather Brabazon Jackson of the Sherwood Foresters. This is a rare example of a window dedicated to a soldier killed in action.

1980 was a significant year in the life of St John’s, for it was then that the District Church Council was formed. The early 1980’s saw tremendous growth in Walton. New housing began to cover the ground like a patchwork quilt and St John’s experienced something of a revival.

With growing numbers and an increasing range of activities, it became clear that the Church was no longer big enough. Following a parish-wide ‘Day of Prayer’ the decision was taken to build a Church Centre dedicated to the extension of God’s Kingdom. The Church Centre, comprising a large hall, lounge, kitchen, office and toilets was built, with money mainly given by members of St Thomas’s and St John’s, and was opened by the then Bishop of Derby on 21st November 1992.

Growth in numbers meant that the original church building was too small and more space was needed for the work with our children and young people. Our vision was to have a larger church building and to extend the Church Centre. The work was split into two phases, the first being to take down the old building and erect a new one, as it was not feasible to enlarge the original church. Again, funding came mainly from church members. The new Parish Church was opened in 2006 and can comfortably seat two hundred worshippers.

Work on the second phase began in September 2009, once sufficient money had been given and pledged to meet the costs. This final phase opened in June 2010 and has provided additional meeting / teaching / activity rooms and a creche room, and links the new church building and adjacent Church Centre with a covered atrium.

The Church Centre is already used by the local community for various meetings and activities and the new Parish Rooms will provide much needed extra space for further community use. The only other community space in Walton is the Village Hall, which is small. The church building is used by two schools, the WI and Rotary for their Christmas concerts and is also used by other appropriate organisations e.g. Holymoorside Choral Society, for occasional events.

Vicar
Revd  Nick Green CA
T:  01246 555881
E:  This email address is being protected from spambots. You need JavaScript enabled to view it.

How to Find Us 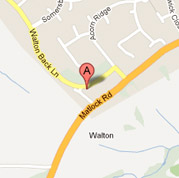